The key read processing steps are outlined in this figure and described in the text below: 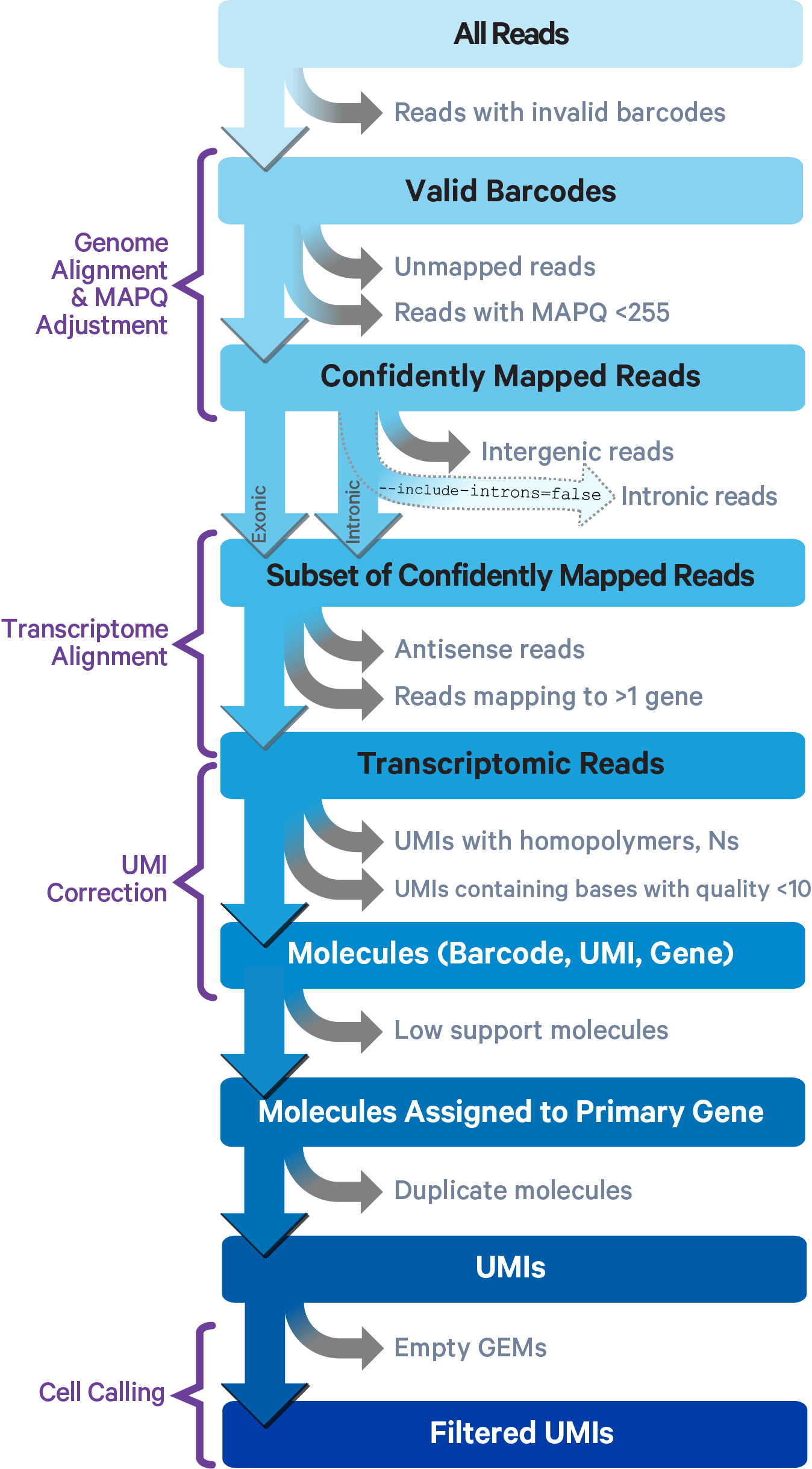 This section on read trimming applies to 3' gene expression assays.

A full length cDNA construct is flanked by the 30 bp template switch oligo (TSO) sequence, AAGCAGTGGTATCAACGCAGAGTACATGGG, on the 5' end and poly-A on the 3' end. Some fraction of sequencing reads are expected to contain either or both of these sequences, depending on the fragment size distribution of the sequencing library. Reads derived from short RNA molecules are more likely to contain either or both TSO and poly-A sequence than longer RNA molecules.

Since the presence of non-template sequence in the form of either TSO or poly-A, low-complexity ends confound read mapping, TSO sequence is trimmed from the 5' end of read 2 and poly-A is trimmed from the 3' end prior to alignment. Trimming improves the sensitivity of the assay as well as the computational efficiency of the software pipeline.

Cell Ranger uses an aligner called STAR, which performs splicing-aware alignment of reads to the genome. Cell Ranger then uses the transcript annotation GTF to bucket the reads into exonic, intronic, and intergenic, and by whether the reads align (confidently) to the genome. A read is exonic if at least 50% of it intersects an exon, intronic if it is non-exonic and intersects an intron, and intergenic otherwise.

Cell Ranger further aligns confidently mapped exonic and intronic reads to annotated transcripts by examining their compatibility with the transcriptome. As shown below, reads are classified based on whether they are exonic (light blue) or intronic (red) and whether they are sense or antisense (purple). 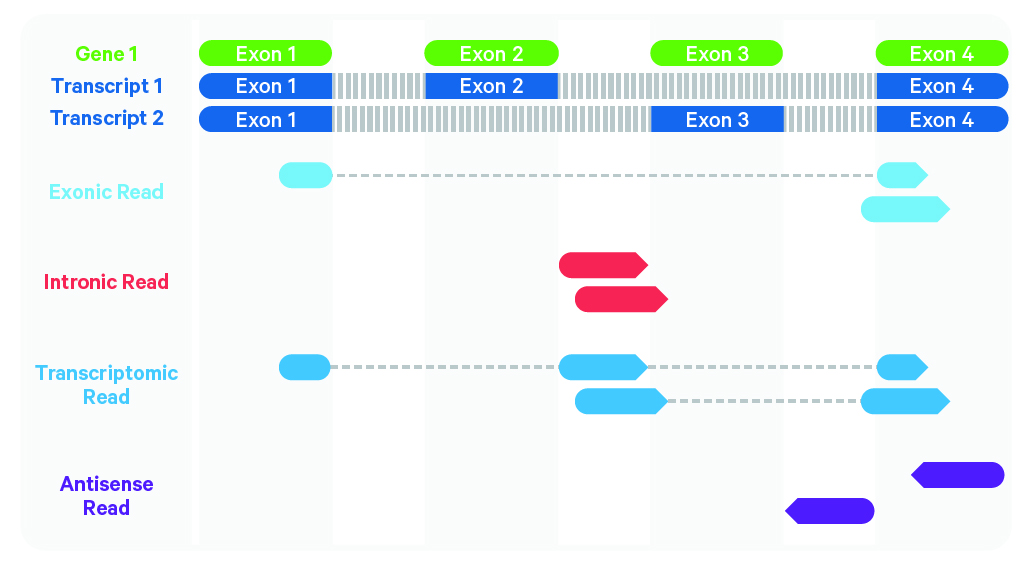 Starting in Cell Ranger 7.0, by default, the cellranger count and cellranger multi pipelines will include intronic reads for whole transcriptome gene expression analysis. Any reads that map in the sense orientation to a single gene - the reads labeled transcriptomic (blue) in the diagram above - are carried forward to UMI counting. Cell Ranger ignores antisense reads (purple). As shown above, antisense reads are defined as any read with alignments to an entire gene on the opposite strand and no sense alignments. Consequently, the web summary metrics "Reads Mapped Confidently to Transcriptome" and "Reads Mapped Antisense to Gene" will reflect reads mapped confidently to exonic regions, as well as intronic regions. The default setting that includes intronic reads is recommended to maximize sensitivity, for example in cases where the input to the assay consists of nuclei, as there may be high levels of intronic reads generated by unspliced transcripts.

Furthermore, a read is considered uniquely mapping if it is compatible with only a single gene. Only uniquely mapping reads are carried forward to UMI counting (see this page for methods to check for multi-mapped reads).

Before counting UMIs, Cell Ranger attempts to correct for sequencing errors in the UMI sequences. Reads that were confidently mapped to the transcriptome are placed into groups that share the same barcode, UMI, and gene annotation. If two groups of reads have the same barcode and gene, but their UMIs differ by a single base (i.e., are one Hamming distance apart), then one of the UMIs was likely introduced by a substitution error in sequencing. In this case, the UMI of the less-supported read group is corrected to the UMI with higher support.

After these two filtering steps, each observed barcode, UMI, gene combination is recorded as a UMI count in the unfiltered feature-barcode matrix. The number of reads supporting each counted UMI is also recorded in the molecule info file.

Cell Ranger v3.0 and later have an improved cell-calling algorithm that is better able to identify populations of low RNA content cells, especially when low RNA content cells are mixed into a population of high RNA content cells. For example, tumor samples often contain large tumor cells mixed with smaller tumor infiltrating lymphocytes (TIL) and researchers may be particularly interested in the TIL population. The new algorithm is based on the EmptyDrops method (Lun et al., 2019).

The algorithm has two key steps:

In the first step, the original Cell Ranger cell calling algorithm is used to identify the primary mode of high RNA content cells, using a cutoff based on the total UMI count for each barcode. Cell Ranger may take as input an expected number of recovered cells (e.g., see --expect-cells for count), N, or as of Cell Ranger 7.0, estimate this number.

The order of magnitude algorithm (OrdMag) estimates the initial number of recovered cells such that barcodes are called cells if total UMI counts exceed m/10, where m is the 99th percentile of top N barcodes based on total UMI counts. The estimation of expect-cells then finds a value x that approximates OrdMag(x) by minimizing a loss function where expect-cells = minx(OrdMag(x) - x)2 / x. Cell Ranger's grid-search goes from 2 to ~262k cells. In the example below, the optimized value for expect-cells is 1,137: 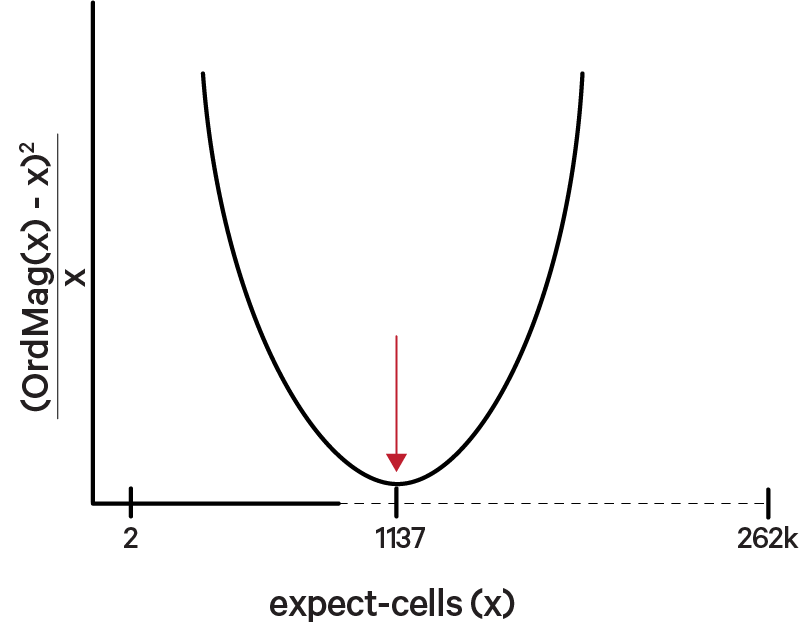 In the second step, a set of barcodes with low UMI counts that likely represent "empty" GEM partitions is selected. A model of the RNA profile of selected barcodes is created. This model, called the background model, is a multinomial distribution over genes. It uses Simple Good-Turing smoothing to provide a non-zero model estimate for genes that were not observed in the representative empty GEM set. Finally, the RNA profile of each barcode not called as a cell in the first step is compared to the background model. Barcodes whose RNA profile strongly disagrees with the background model are added to the set of positive cell calls. This second step identifies cells that are clearly distinguishable from the profile of empty GEMs, even though they may have much lower RNA content than the largest cells in the experiment.

In some cases the set of barcodes called as cells may not match the desired set of barcodes based on visual inspection. This can be remedied by either re-running count or reanalyze with the --force-cells option, or by selecting the desired barcodes from the raw feature-barcode matrix in downstream analysis. Custom barcode selection can also be done by specifying --barcodes to reanalyze.

Cell Ranger 4.0 includes a new dedicated cell calling algorithm that is applied specifically to identify cells from Targeted Gene Expression datasets. The Targeted Gene Expression cell calling method relies on identification of a transition point based on the shape of the barcode rank plot to separate cell-associated barcodes from background partitions, and is designed to successfully classify cells for a wide variety of potential target gene panels.

Note: This method is distinct from the cell calling algorithm used for non-targeted Whole Transcriptome Analysis (WTA) {{platform.name}} single cell datasets, and it does not employ the EmptyDrops approach (Lun et al., 2019) due to the distinct features of Targeted Gene Expression datasets.

When using Cell Ranger in Feature Barcode Only Analysis mode, only step 1 of the cell calling algorithm is used. The cells called by this step of the algorithm are returned directly.

When multiple genomes are present in the reference (for example, Human and Mouse, or any other pair), Cell Ranger runs a special multi-genome analysis to detect barcodes associated with partitions where cells from two different genomes were present. Among all barcodes called as cell-associated (See Calling cell barcodes), they are initially classified as Human or Mouse by which genome has more total UMI counts for that barcode. Barcodes with total UMI counts that exceed the 10th percentile of the distributions for both Human and Mouse are called as observed multiplets. Because Cell Ranger can only observe the (Human, Mouse) multiplets, it computes an inferred multiplet rate by estimating the total number of multiplets (including (Human, Human) and (Mouse, Mouse)). This is done by estimating via maximum likelihood the total number of multiplet GEMs from the observed multiplets and the inferred ratio of Human to Mouse cells. If this ratio is 1:1, the inferred multiplet rate is approximately twice the observed (Human, Mouse) multiplets.

In order to reduce the gene expression matrix to its most important features, Cell Ranger uses Principal Components Analysis (PCA) to change the dimensionality of the dataset from (cells x genes) to (cells x M) where M is a user-selectable number of principal components (via num_principal_comps). The pipeline uses a python implementation of IRLBA algorithm, (Baglama & Reichel, 2005), which we modified to reduce memory consumption. The reanalyze pipeline allows the user to further reduce the data by randomly subsampling the cells and/or selecting genes by their dispersion across the dataset. Note that if the data contains Feature Barcode data, only the gene expression data will be used for PCA and subsequent analysis.

For visualizing data in 2-d space, Cell Ranger passes the PCA-reduced data into t-SNE (t-Stochastic Neighbor Embedding), a nonlinear dimensionality reduction method (Van der Maaten, 2014). The C++ reference implementation by Van der Maaten (2014) was modified to take a PRNG seed for determinism and to expose various parameters which can be changed in reanalyze. We also decreased its runtime by fixing the number of output dimensions at compile time to 2 or 3.

Cell Ranger also supports visualization with UMAP (Uniform Manifold Approximation and Projection), which estimates a topology of the high dimensional data and uses this information to estimate a low dimensional embedding that preserves relationships present in the data (McInnes et al, 2018). The pipeline uses the python implementation of this algorithm by McInnes et al (2018). The reanalyze pipeline allows the user to customize the parameters for the UMAP, including n_neighbors, min_dist and metric etc. Below shows the t-SNE (left) and UMAP (right) visualizations of our public dataset 5k PBMCs.

The graph-based clustering algorithm consists of building a sparse nearest-neighbor graph (where cells are linked if they among the k nearest Euclidean neighbors of one another), followed by Louvain Modularity Optimization (LMO; Blondel, Guillaume, Lambiotte, & Lefebvre, 2008), an algorithm which seeks to find highly-connected "modules" in the graph. The value of k, the number of nearest neighbors, is set to scale logarithmically with the number of cells. An additional cluster-merging step is done to perform hierarchical clustering on the cluster-medoids in PCA space and merge pairs of sibling clusters if there are no genes differentially expressed between them (with B-H adjusted p-value below 0.05). The hierarchical clustering and merging is repeated until there are no more cluster-pairs to merge.

The use of LMO to cluster cells was inspired by a similar method in the R package Seurat.

Note that Cell Ranger's implementation differs slightly from the sSeq paper: the size factors are calculated using total UMI count instead of using DESeq's geometric mean-based definition of library size. As with sSeq, normalization is implicit in that the per-cell size factor parameter is incorporated as a factor in the exact and asymptotic probability calculations.

The cell subpopulation matches between batches will then be used to merge multiple batches together (Hie et al, 2018). The difference in expression values between cells in a MNN pair provides an estimate of the batch effect. A correction vector for each cell is obtained as a weighted average of the estimated batch effects, where a Gaussian kernel function up-weights matching vectors belonging to nearby points (Haghverdi et al, 2018).