B cells: Fully rearranged B cell receptors (BCRs) can undergo SHM, which can increase antigen affinity. Thus for BCRs, V(D)J transcripts in a clonotype can differ at any position, as shown below: 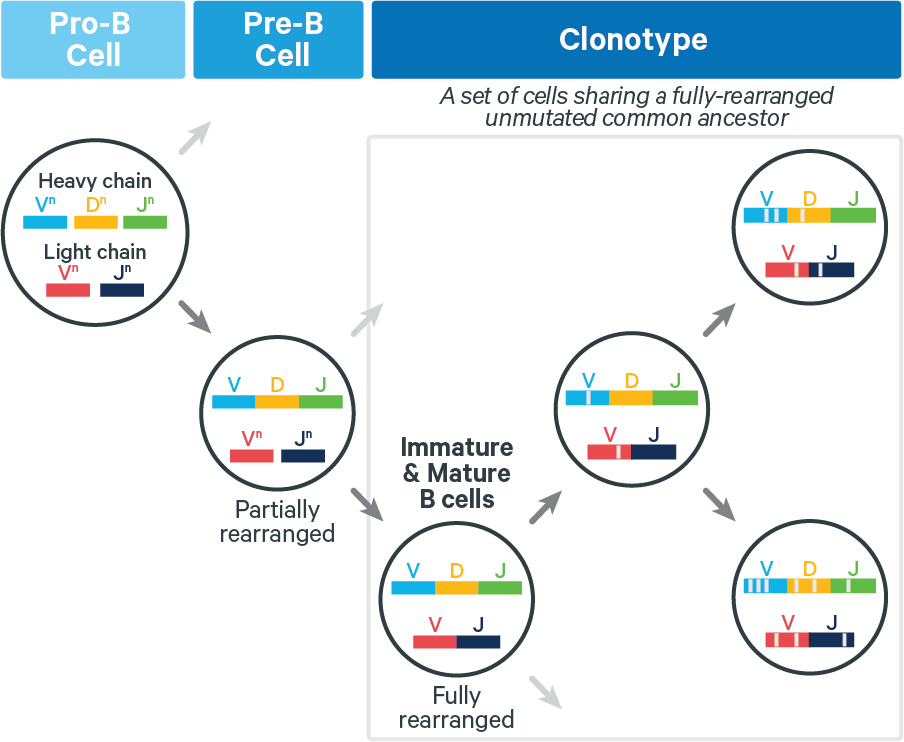 B cell clonotypes can be hard to infer accurately because SHM can introduce numerous mutations. Cell Ranger v5.0 and above accomplishes B cell clonotype grouping by invoking a module for clonal analysis called enclone which simultaneously filters and groups cells into clonotypes.

For clonotype grouping, enclone mainly gets its information from an internally generated Cell Ranger file called all_contig_annotations.json. The relationship between enclone and Cell Ranger is illustrated here:

For each dataset, enclone derives the reference sequence for V genes in the donor's genome (germline sequence) to use as a reference for SHMs.

Germline variant assessment for J genes is currently not performed as it does not greatly enhance clonotype specificity.

Exact subclonotypes are iteratively merged into clonotypes based on comparing each pair of exact subclonotypes to each other. Two cells with set criteria of shared differences and minimal CDR3 mutations are deemed to be in the same clonotype. Merging criteria are briefly described here. Visit the enclone help page for details.

During library generation, artifacts can arise by two mechanisms:

Contamination detection is a complex task and is accomplished via multiple heuristic filters. Some barcode filtering happens during the assembly and cell calling stages of Cell Ranger execution. enclone uses Cell Ranger's cell calling information and additionally performs its own barcode and clonotype filtering by employing a series of heuristic tests. Filtering and clonotype grouping happen simultaneously.

Within Cell Ranger, enclone applies these default filters, some of which are recursive:

enclone as a command line tool and stand-alone GUI

enclone is also available in beta as a separate, fast, exploratory, command line tool and stand-alone GUI. The command line form has arguments permitting granular control over the clonotyping and filtering heuristics. enclone can also display clonotypes and infer phylogenetic trees. enclone as a command line tool is frequently updated and supported via [email protected], separate from Cell Ranger.