By default, a .cloupe gene expression dataset includes all barcodes called as cells by Cell Ranger's cell caller. The default clusters and projections in a .cloupe file are derived from this set of cells. However, it may be more useful to only analyze a subset of these cells. For example, it may be desirable to more precisely screen out possible cell multiplets, dead cells, or cells with low diversity. Alternatively, it may be preferable to focus on a particular type of cell, or even remove a particular cell type from an analysis. For these reasons, Loupe Browser 5.0 and later provides an interactive filtering and reclustering workflow. In a few short steps, it is possible to identify cells of interest, and then compute a Louvain clustering and t-SNE projection over these cells. Loupe Browser 5.1 and later additionally supports the generation of a UMAP projection. 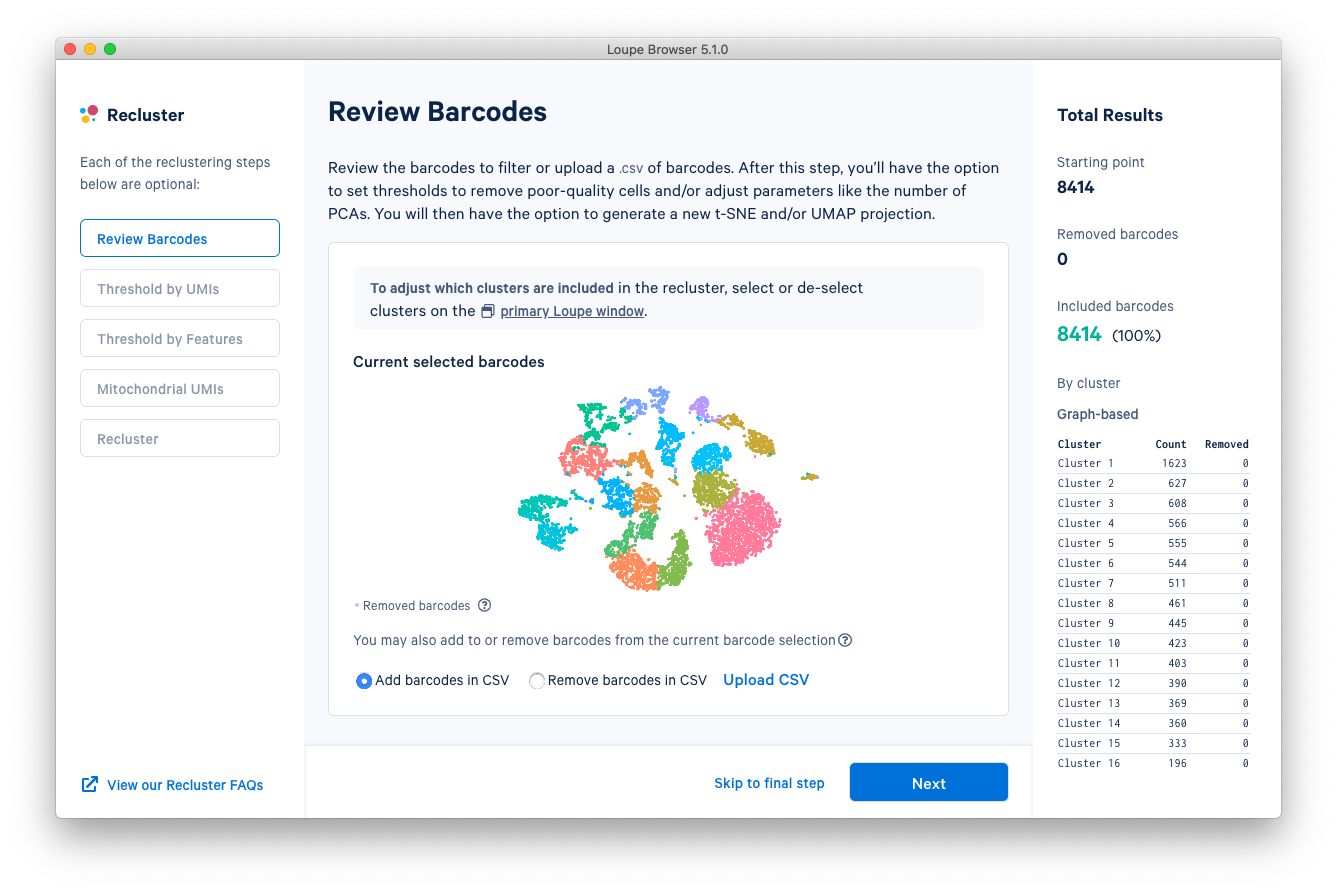 There are three columns for all steps in the workflow. The leftmost column shows the current progress through the workflow steps. It is possible to advance or go back to any step in the workflow at any time. The middle column contains the tooling for the active step. The rightmost column shows statistics about which barcodes have been removed. On the bottom of the reclustering window, there are buttons to advance to the next step, or go straight to the end.

Each step in the workflow merits additional explanation.

The first step, Review Barcodes, allows an initial filtering by either whole clusters, or a barcode list. It is connected to the main window; changing the category in the main window will change the active category in the reclustering workflow. By selecting or de-selecting clusters in the main window, it is possible to either include or exclude entire clusters of barcodes from downstream analysis. The image below illustrates the built-in AMLTutorial dataset. With the AMLStatus category selected and the 'Normal' cluster de-selected, as shown below: 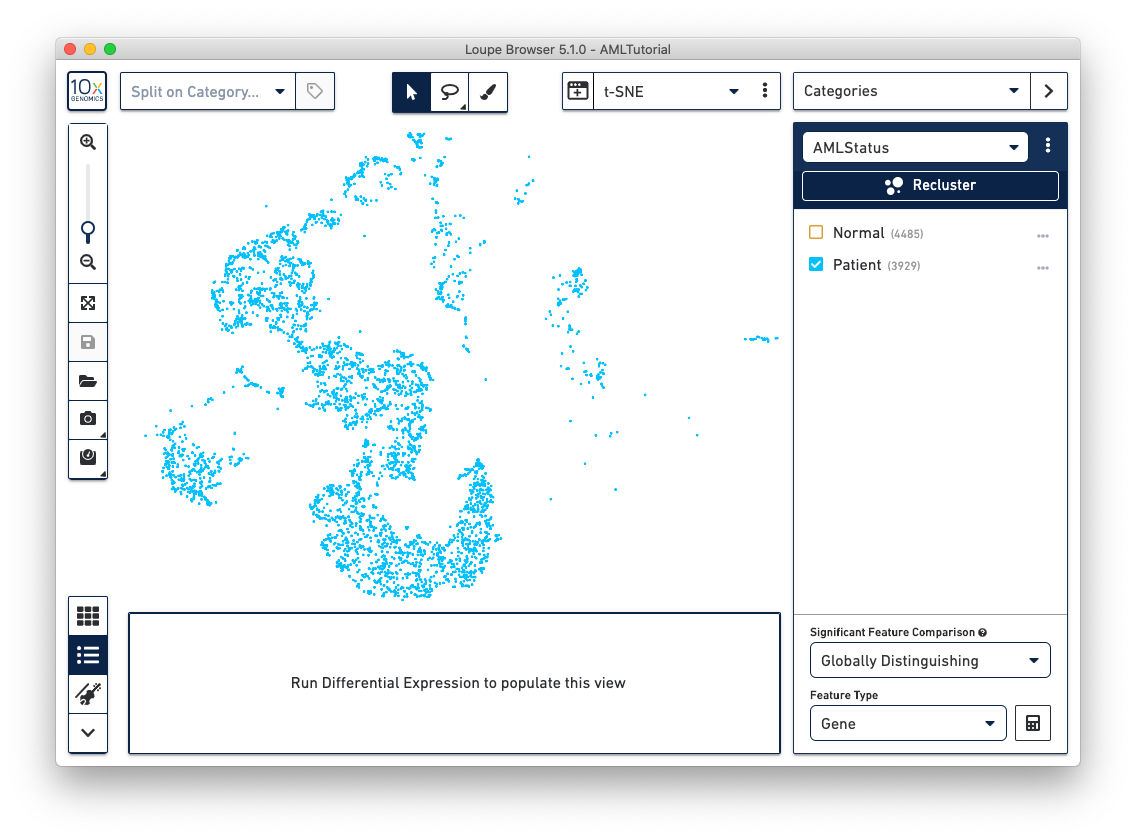 The reclustering workflow will respond in kind, removing the Normal barcodes: 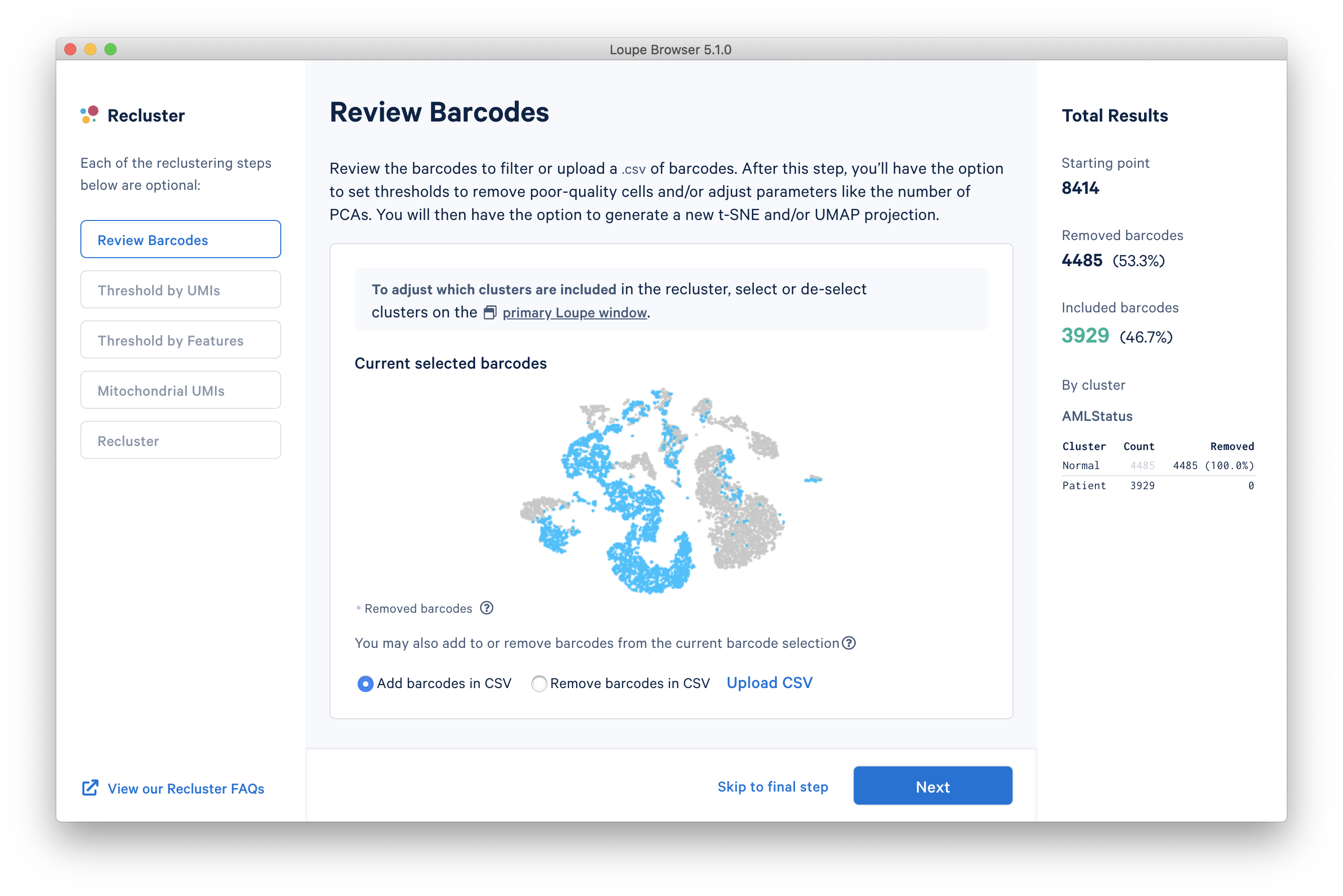 It is also possible to filter by custom categories, such as those created with the lasso tools, quantitative filters, boolean filters, or CSV import. It is recommended that these categories be created prior to initiating the reclustering workflow.

Finally, for finer-grained control, or to filter by lists defined by external algorithms, it is possible to either explicitly include or exclude a set of barcodes by clicking the Upload CSV link below the plot.

The next step is to threshold by UMI count. This step shows a violin plot of UMI counts of the currently selected barcodes. Moving the sliders at the top and bottom of the distribution will remove barcodes from outside the range. It is also possible to enter numerical values explicitly, or see the distribution on a log plot. For the purpose of this tutorial, an upper UMI count limit of 20,000 will be used, as shown below in log scale. 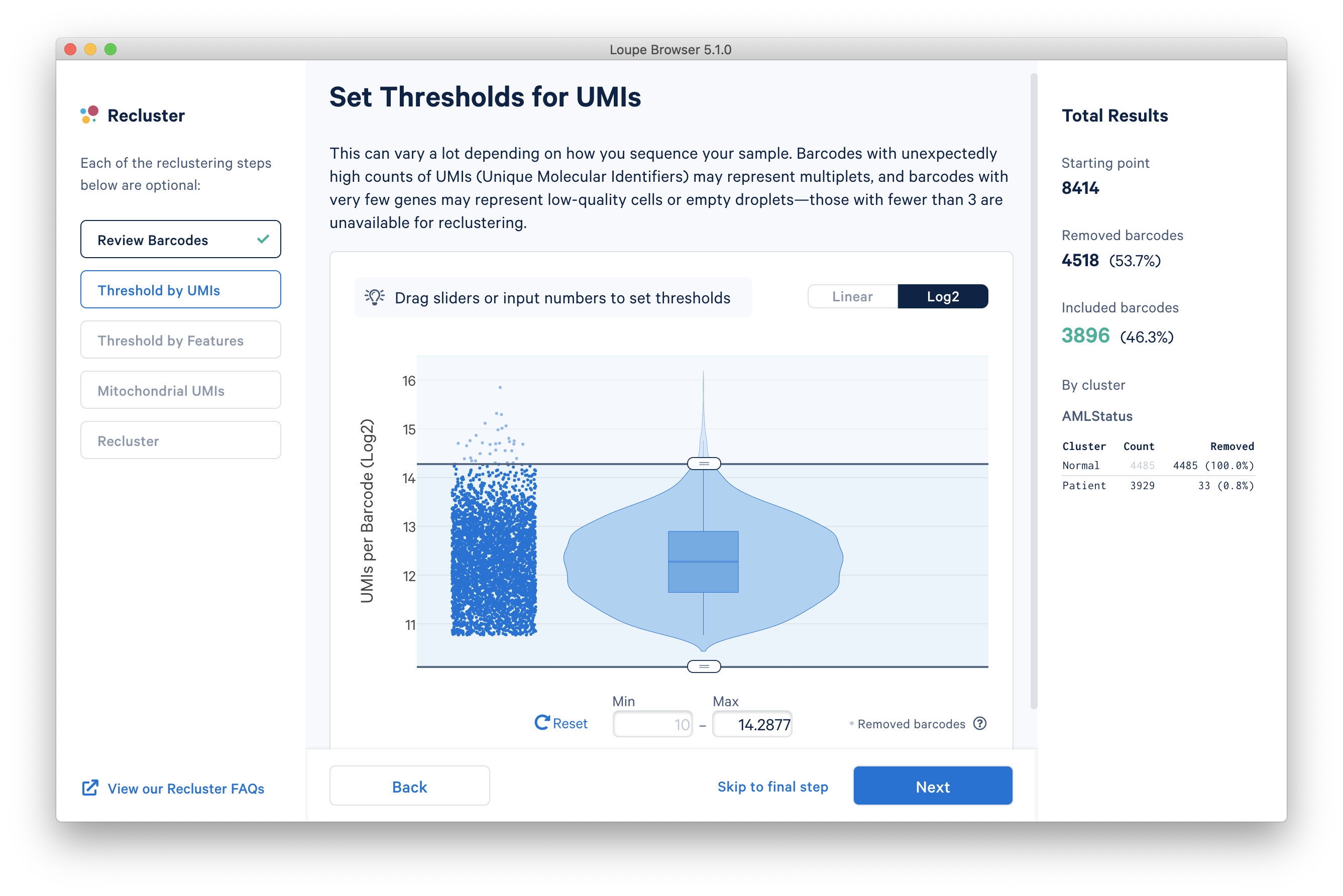 The next step is to threshold by distinct number of features detected. For gene expression datasets (even with feature barcoding), this will be the number of distinct genes found for each barcode. Depending on the experiment, barcodes with anomalously low or high numbers of distinct features may be undesirable. For the purpose of this tutorial, a lower feature count bound of 50 will be used, as shown below. 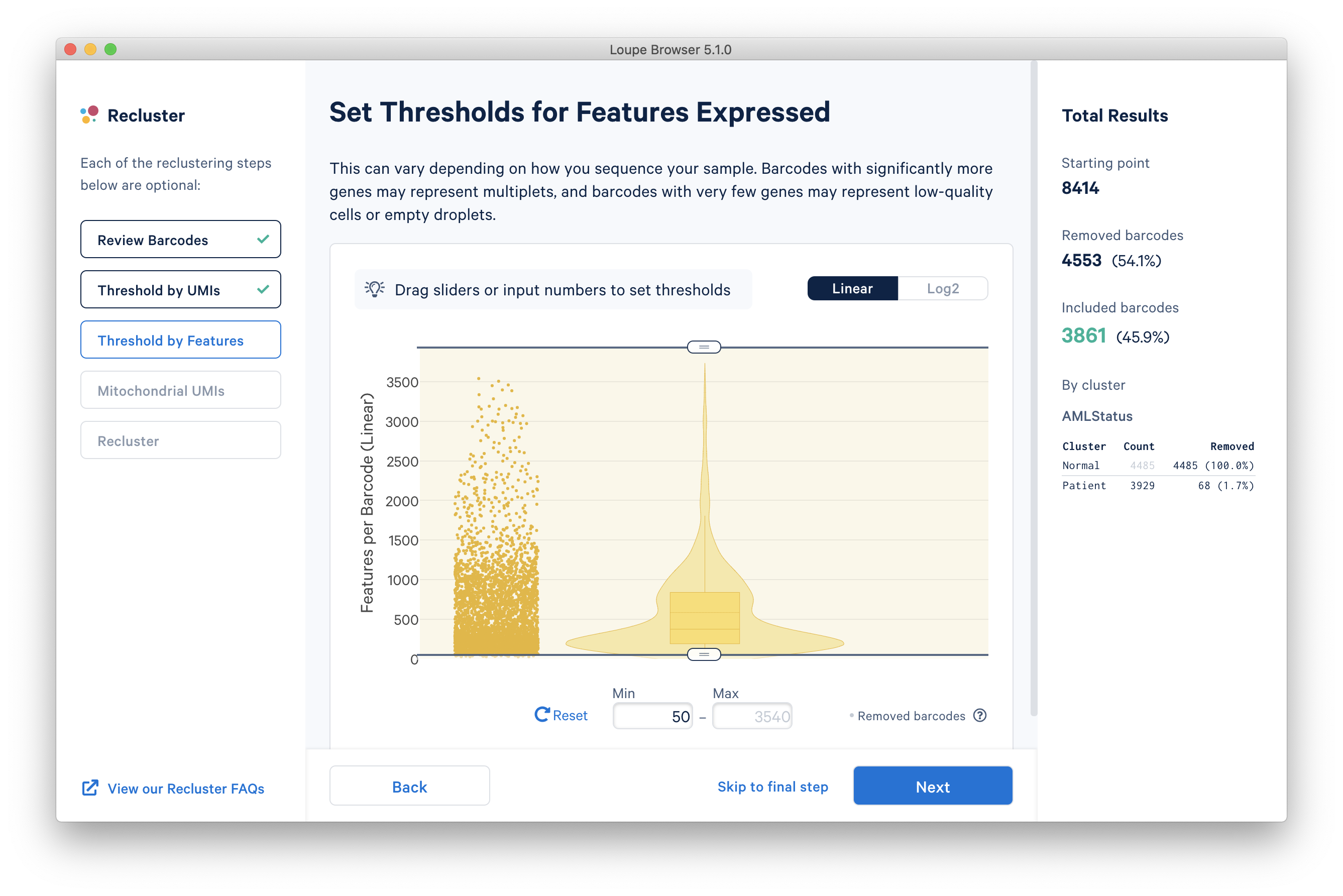 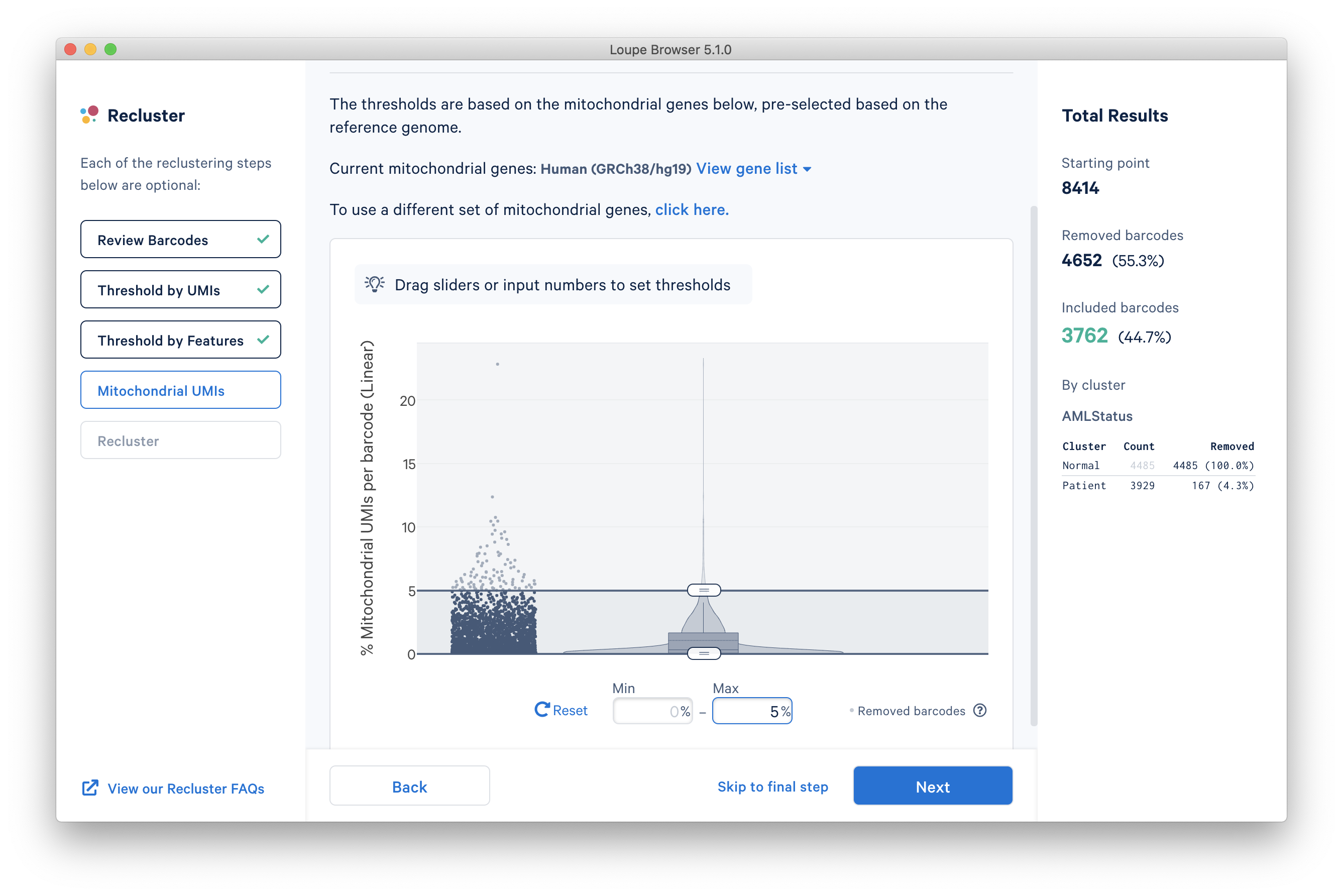 After selecting a reference or uploading a gene list, another violin plot and slider will be visible. For the purpose of this tutorial, a mitochondrial fraction upper bound of 5% will be used.

With the filtering steps done, the new step is to determine the type of plot to generate. It is possible to generate a t-SNE or UMAP projection. Note that selecting both will double the processing time.

Under the Adjust reanalyze parameters (for advanced users) dropdown it is possible to enter custom parameters for the dimensionality reduction used for clustering, or the parameters for generating the t-SNE and UMAP plots respectively. For each parameter, there are detailed instructions if you select Learn more. Defaults are recommended, and no action is necessary if the default values are acceptable. In this tutorial, a UMAP projection with default reanalyze parameters was selected. 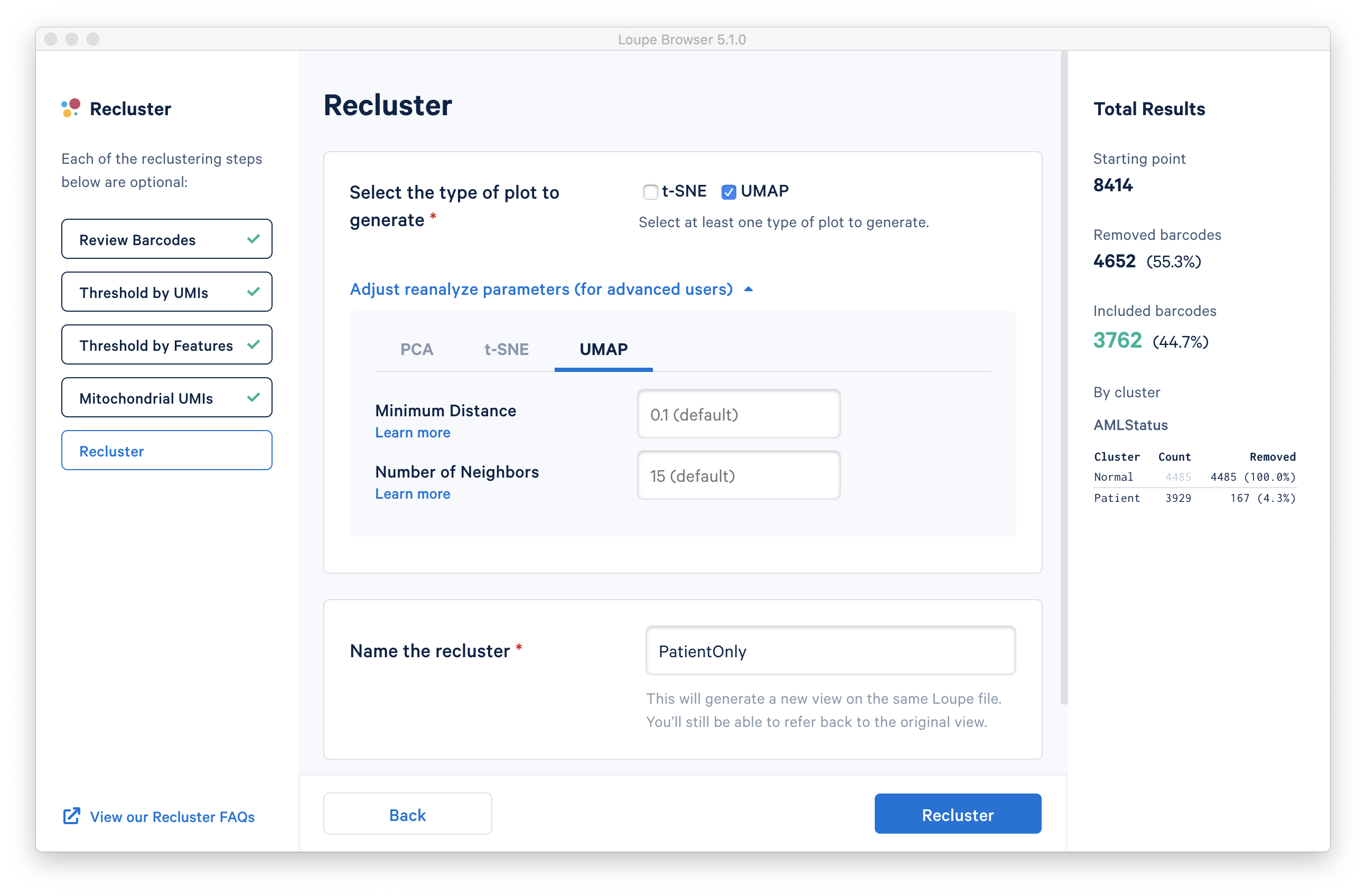 Finally, the last step is to name the filtered dataset. The name will be used in the main window as both the projection and clustering category, so it should be recognizable. In this tutorial, the name 'PatientOnly' is appropriate, given that the filtering limited the barcodes to the Patient subset, as well as applying some exclusion of high-UMI, low-feature and high-mito% barcodes.

Pressing the Recluster button will then kick off the reclustering algorithms. In the background, Loupe will run virtually the same principal components, Louvain clustering, and t-SNE algorithms as the Cell Ranger pipeline. 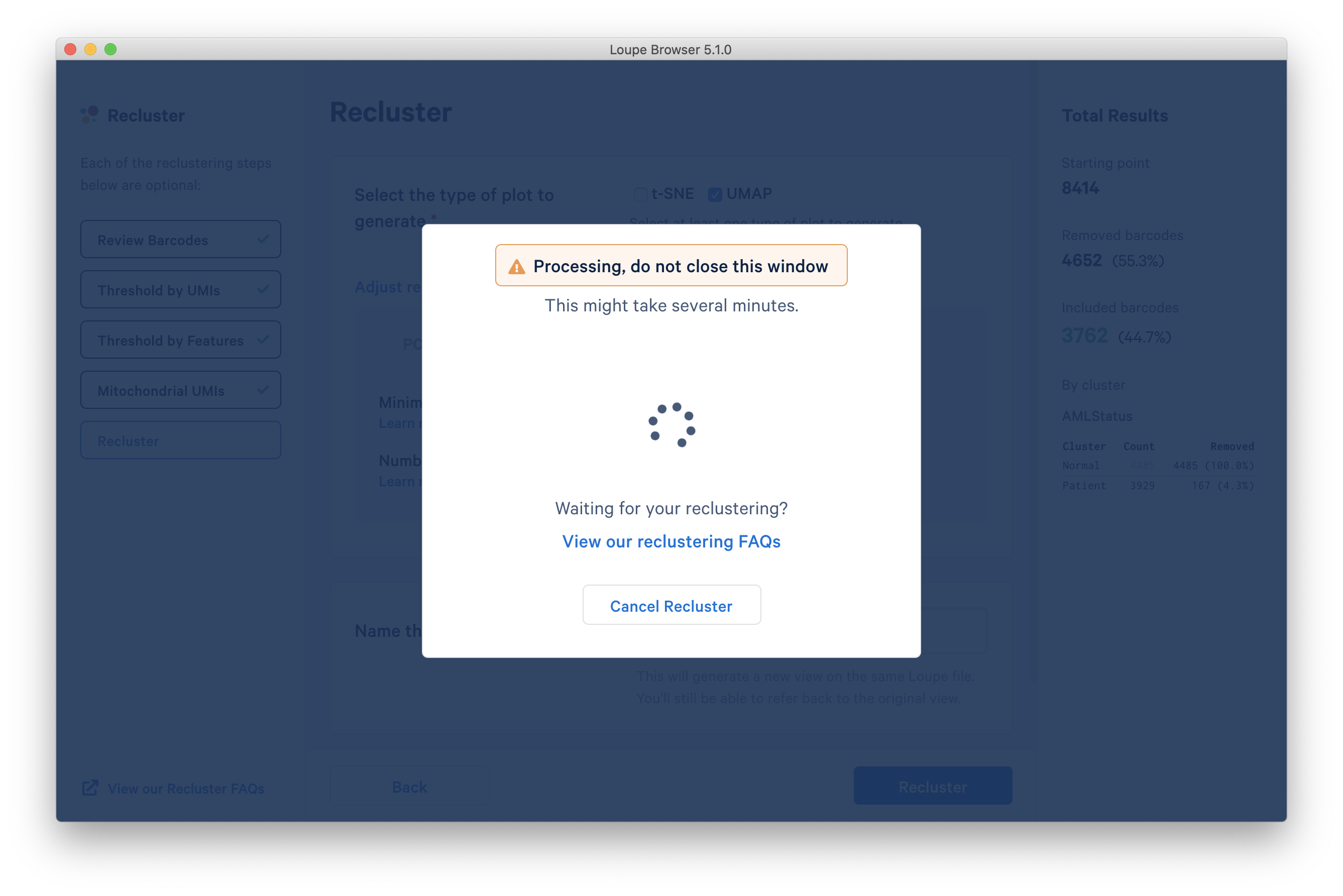 When reclustering completes, click on the Done button, which will close the workflow window, and bring up the new projection and category in the main window. You can now find it under a separate Analysis category in the View Selector. The AMLTutorial PatientOnly dataset is shown below: 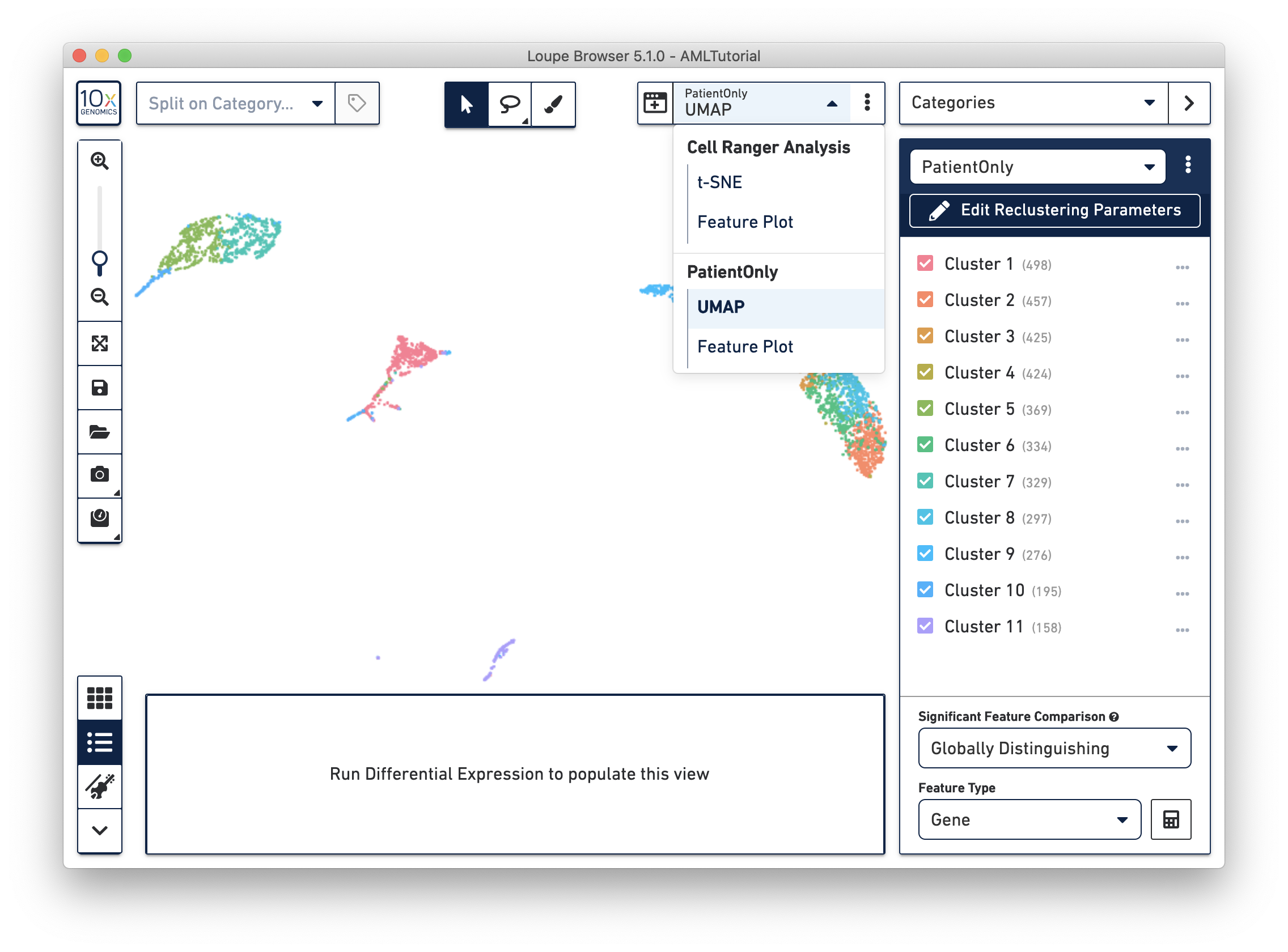 Saving the .cloupe at this time will save the reclustered projections and categories only (though not any computed differential expression data). Finally, it is possible to either tweak the reclustering or recall its parameters by clicking on the Edit Reclustering Parameters button, located below any reclustered category.