The 5' Chromium Single Cell Immune Profiling Solution with Feature Barcode technology enables simultaneous profiling of V(D)J repertoire, cell surface protein, antigen specificity and gene expression data. The cellranger multi pipeline enables the analysis of these multiple library types together. The advantage of using the multi pipeline (as opposed to using cellranger vdj and cellranger count separately) is that it enables more consistent cell calling between the V(D)J and gene expression data. This involves the following steps:

To simultaneously generate single-cell feature counts, V(D)J sequences and annotations for a single library, run cellranger multi. This requires a config CSV, which is described below, and invoking cellranger multi with the following arguments:

The multi config CSV contains both the library definitions and experiment configuration variables. It is composed of up to four sections: [gene-expression], [feature], [vdj], and [libraries]. The [gene-expression], [feature], and [vdj] sections have at most two columns, and are responsible for configuring their respective portions of the experiment. The [libraries] section specifies where input FASTQ files may be found. A template for a multi config CSV can be downloaded here, and example multi config CSVs can be downloaded from 5.0.0 public datasets here.

By default, cellranger will use all of the cores available on your system to execute pipeline stages. You can specify a different number of cores to use with the --localcores option; for example, --localcores=16 will limit cellranger to using up to sixteen cores at once. Similarly, --localmem will restrict the amount of memory (in GB) used by cellranger.

The pipeline will create a new folder named with the run ID you specified using the --id argument (e.g. /home/jdoe/runs/sample345) for its output. If this folder already exists, cellranger will assume it is an existing pipestance and attempt to resume running it.

A successful cellranger multi run should conclude with a message similar to this:

The output of the pipeline will be contained in a folder named with the run ID you specified (e.g. sample345). The subfolder named outs will contain the main pipeline outputs:

Upon completion, the cellranger multi pipeline will produce an outs directory with the following structure: 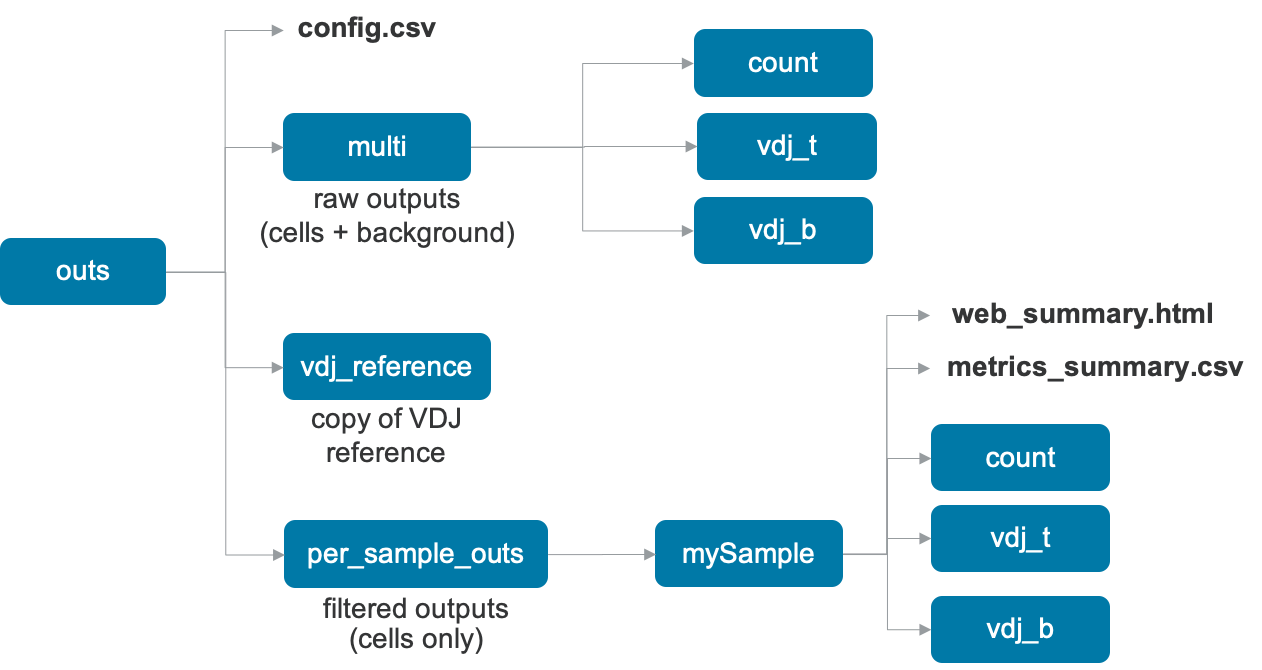 The files in the multi folder contain raw data, i.e., the data for all barcodes including cells and background, while the files in the per_sample_outs directory are the filtered files, i.e. for cells in this sample. The pipeline also outputs a copy of the input VDJ reference in the vdj_reference directory.

Once cellranger multi has successfully completed, you can browse the resulting summary HTML file in any supported web browser, or refer to the count and vdj sections to explore the data by hand.

When to use the multi pipeline

Features not in cellranger multi

The cellranger multi pipeline supports downsampling the reads by specifying a rate between 0 and 1 independently for each library. It also allows trimming the reads to a fixed length, which is not supported in the cellranger vdj pipeline.