The microscope slides used to generate Visium data have features that Space Ranger users need to know. In order to run Space Ranger, it is necessary to know the serial number associated with the slide that generated the data you intend to analyze, as well as the capture area associated with each sample.

The image below illustrates these key features of the Visium slide and these terms are explained in the glossary below. 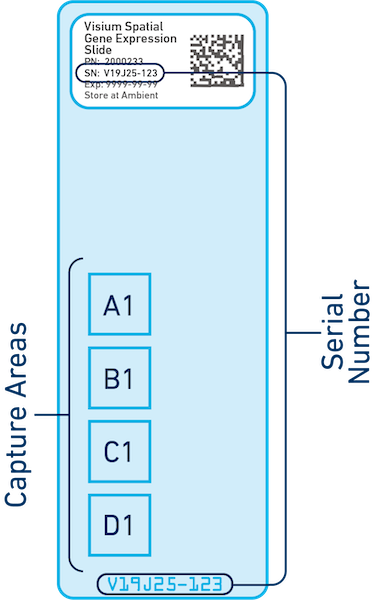 Area (or Capture Area) - One of the four active regions where tissue can be placed on a Visium slide. Each area is intended to contain only one tissue sample. Slide areas are named consecutively from top to bottom: A1, B1, C1, D1.

Brighfield Image - A light-microscopy image depicting tissue on a slide. In a Visium experiment, a brightfield image is used as an anatomical reference. These images are usually stained with hematoxylin and eosin in order to highlight tissue structure (see H&E staining below).

Fluorescence Imaging - An imaging technique whereby signal is generated by fluorophores that re-emit narrow-spectrum light when excited by light of a certain wavelength or color.

Fiducial Frame - A frame of specially patterned spots surrounding each capture area. These spots help the sample microscopist see where to place tissue and are also used by Space Ranger to determine where the capture area is in an image.

Fiducial Marker - A subset of the fiducial spots in each corner of the capture area that make easily identifiable shapes including an hourglass, a triangle, an open hexagon, and a filled hexagon.

Gateway Slide - A Visium Spatial Gene Expression slide with a reduced number of capture areas. These slides are the same as the original Visium slides, but only have capture areas A1 and D1. Gateway slides have serial numbers starting with "V2."

Sample - A single tissue section applied to a single capture area on a Visium slide.

Slide File - A file describing the layout of capture spots in a single slide identified by slide serial number.

Slide Serial Number - The unique identifier printed on the label of each Visium slide. The serial number starts with V1 and ends with a dash and a three digit number, such as 123.

Count Matrix (or Feature-Barcode Matrix) - A matrix of counts representing the number of unique observations of each feature (gene) within each spot barcode. Genes defined by the transcriptome reference appear as rows in the matrix. Each barcode is a column of the matrix.

Dual Indexing - A strategy for sequencing multiple samples on the same flowcell by using two oligonucleotide sequences, one attached to either end of each fragment to be sequenced, in order to uniquely identify the sample. The Visium library construction only supports multiplexing samples using this dual-index strategy. See sample index below.

Sample Index - An oligonucleotide sequence used in library construction to differentiate multiple samples that are sequenced on the same flowcell. On the Illumina platform, these sequences are read out as separate "index reads" and reads are sorted into sample-specific files using mkfastq. The Visium library construction supports only "dual-indexing" (see above).

Sequencing Run (or Flowcell) - The output data, including Illumina BCL files, from one sequencing instrument run. The data can be demultiplexed by lane or by sample index. See mkfastq for more information about demultiplexing.

Target Panel CSV file - A CSV file declaring the target gene panel used for a Targeted Gene Expression experiment, which specifies detailed information about the targeted genes and baits included in the panel. This file must be provided to spaceranger count via the --target-panel option when analyzing Targeted Gene Expression data. Details and specifications of the Target Panel CSV file format are documented here.

Baits - A set of oligonucleotide sequences designed to specifically hybridize to and recover molecules from targeted genes during the hybridization-capture enrichment step of the Targeted Gene Expression assay.

Parent - A WTA spatial gene expression library or dataset that was used as the input material for a Targeted Gene Expression experiment. Because the Parent and its corresponding Targeted dataset are both derived from the same Library, it is possible to directly compare results from these matched datasets in a pairwise manner, as enabled by spaceranger targeted-compare.