Starting with Cell Ranger 3.0, it is possible to calculate gene expression alongside additional analytes using Feature Barcoding technology. This allows users to see additional measurements per cell, such as the quantity of surface marker proteins, or CRISPR guide RNAs, or TCR-antigen specificity, while still having access to a cell's gene expression or immune profile. Loupe Cell Browser 3.0 has a number of features that facilitate feature barcode analysis.

To see an example of the integrated analysis of gene expression and cell surface marker expression (labeled with TotalSeq™-B Feature Barcoding antibodies), download the files from the link below:

This dataset comes from cells from a dissociated extranodal marginal zone B cell tumor (MALT: Mucosa-Associated Lymphoid Tissue), labeled with a panel of 17-TotalSeq™-B antibodies. 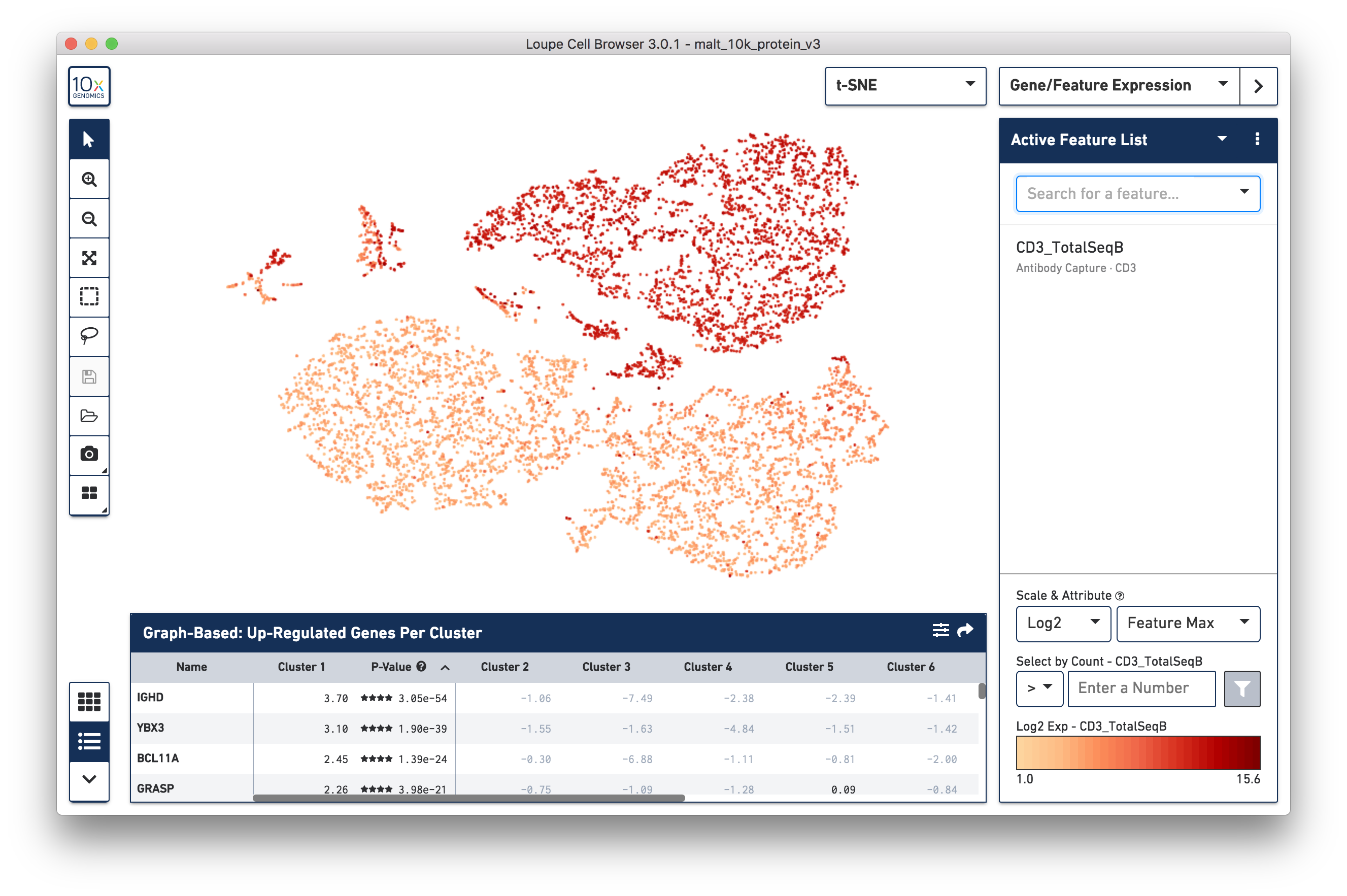 If a dataset was processed with Feature Barcoding technology, the Cell Ranger pipeline will generate additional t-SNE plots alongside gene expression t-SNE plots, derived from Feature Barcoding counts. This might make it easier to distinguish subpopulations based on differences in surface marker or CRISPR guide RNA expression, or TCR-antigen specificity. Since the MALT dataset includes 17 cell surface markers, Cell Ranger computes a projection for the 17 cell surface marker rows in the feature-barcode matrix. This alternate projection can be viewed by selecting Antibody t-SNE from the projection selector: 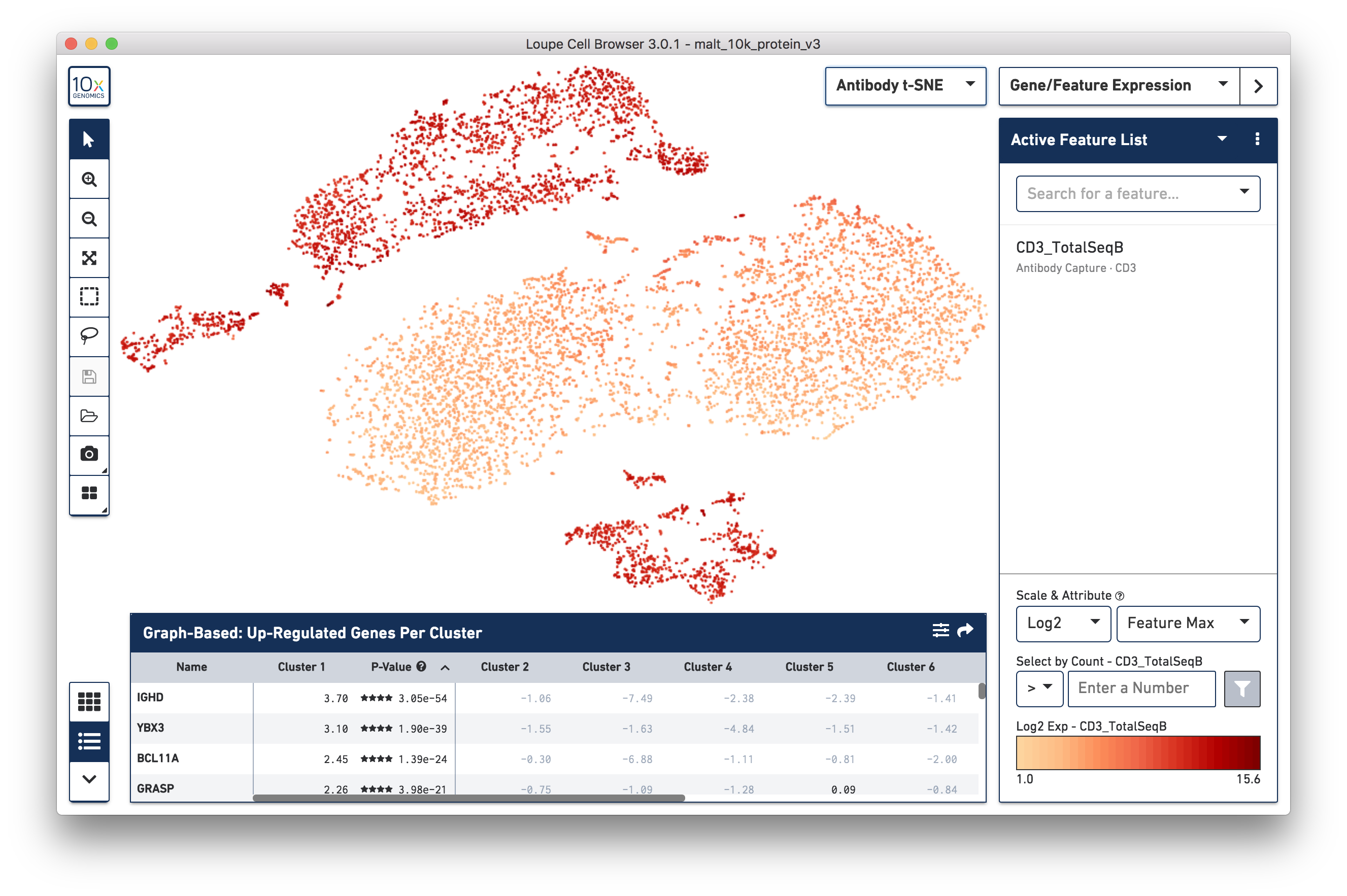 The structure of the t-SNE cluster plot can be used to determine cell types in this case, but it may be more useful and precise to more quantitatively categorize cell types, as is typically done in flow cytometry. Loupe Cell Browser's Feature Plot plots cell barcodes by the expression of one or two features, which makes it easy to threshold cell populations by expression, particularly for features with high dynamic range, such as cell surface markers. 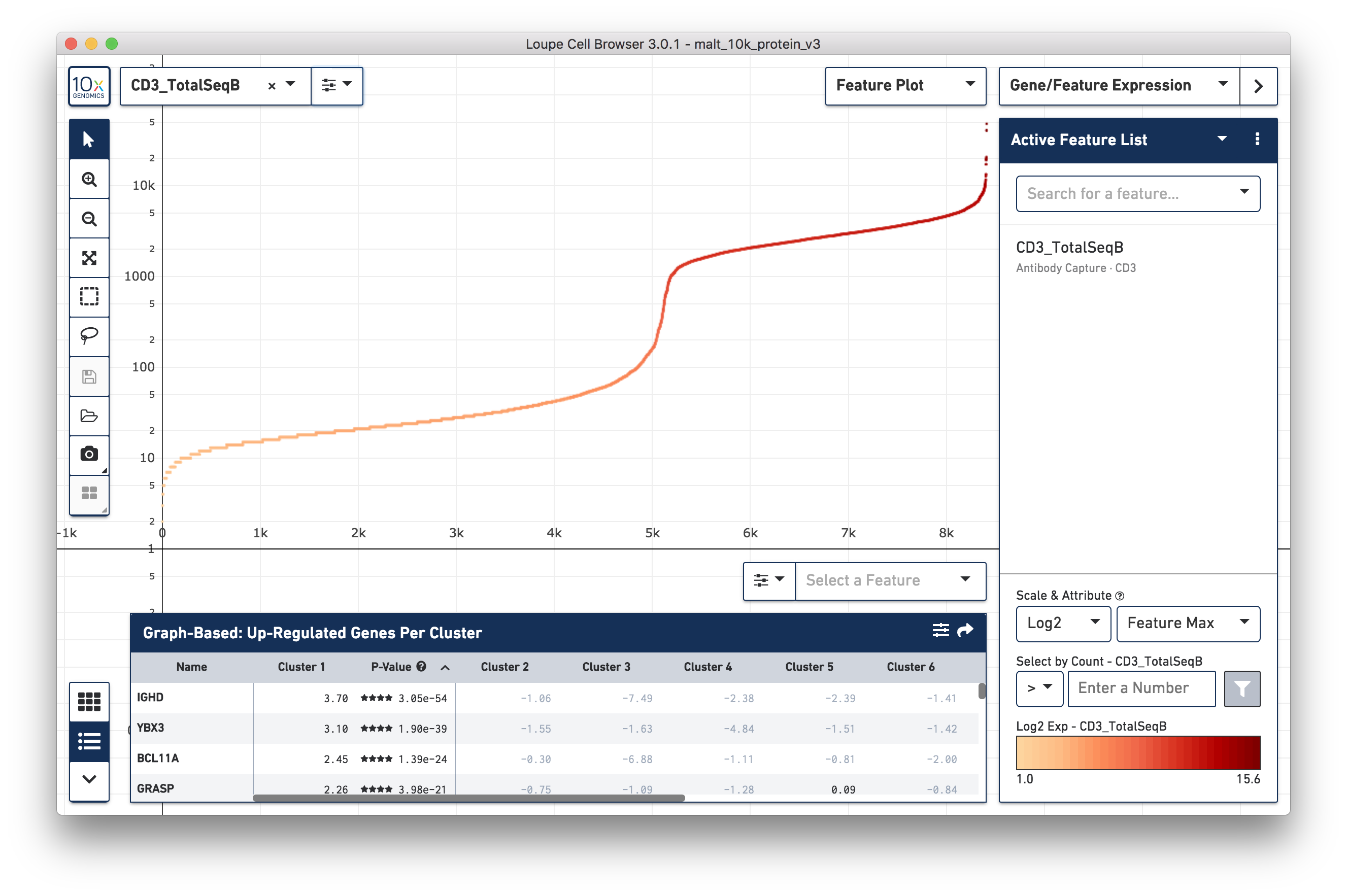 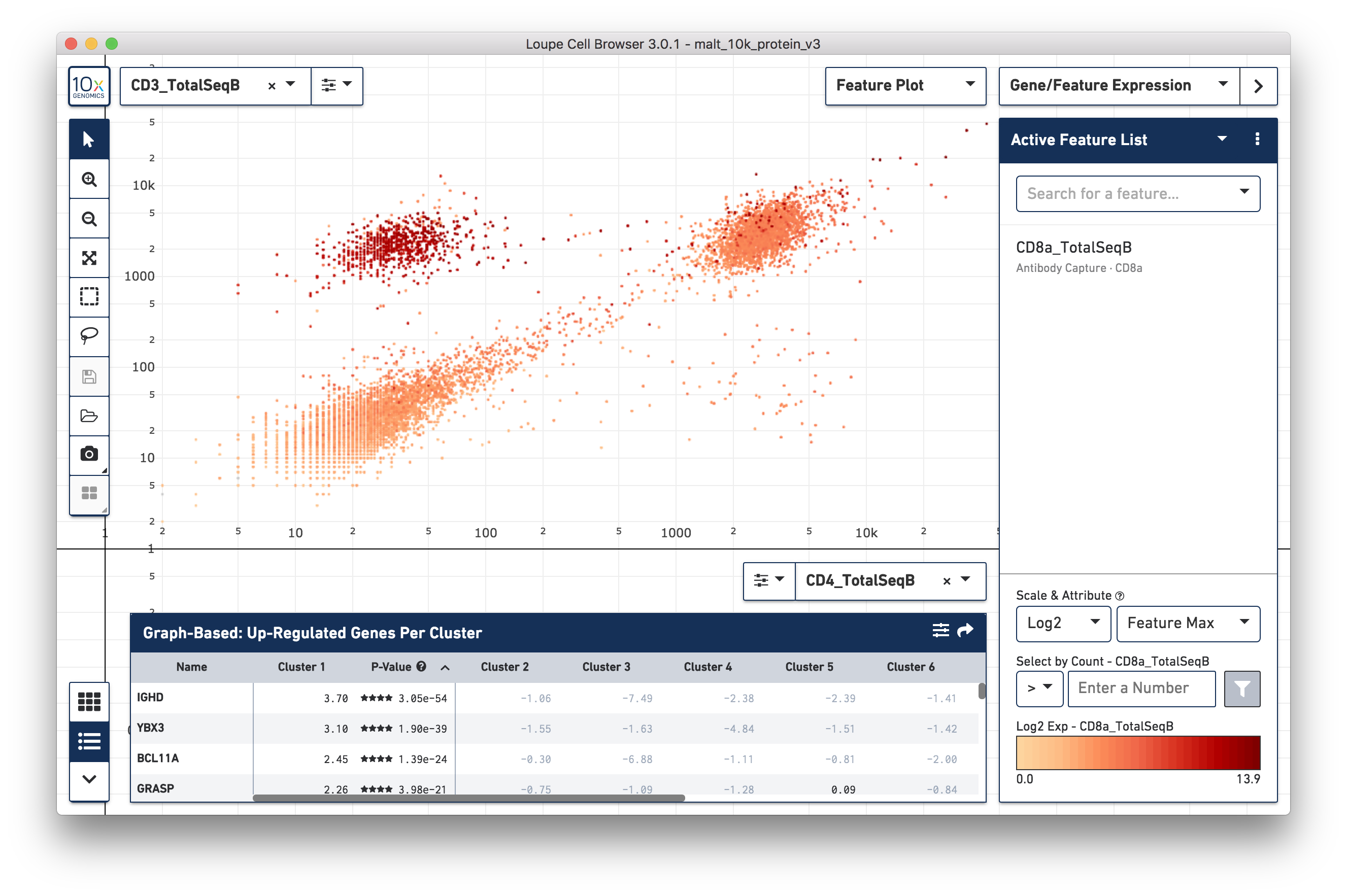 Finally, just as it is possible to determine differential gene expression between clusters, Loupe Cell Browser 3.0 can also determine differential cell surface marker expression between clusters. In the antibody t-SNE plot, recall that the central cluster of B cells looks like it is made of two distinct clusters. Use the lasso plot to create two different subclusters within the B cell cluster: 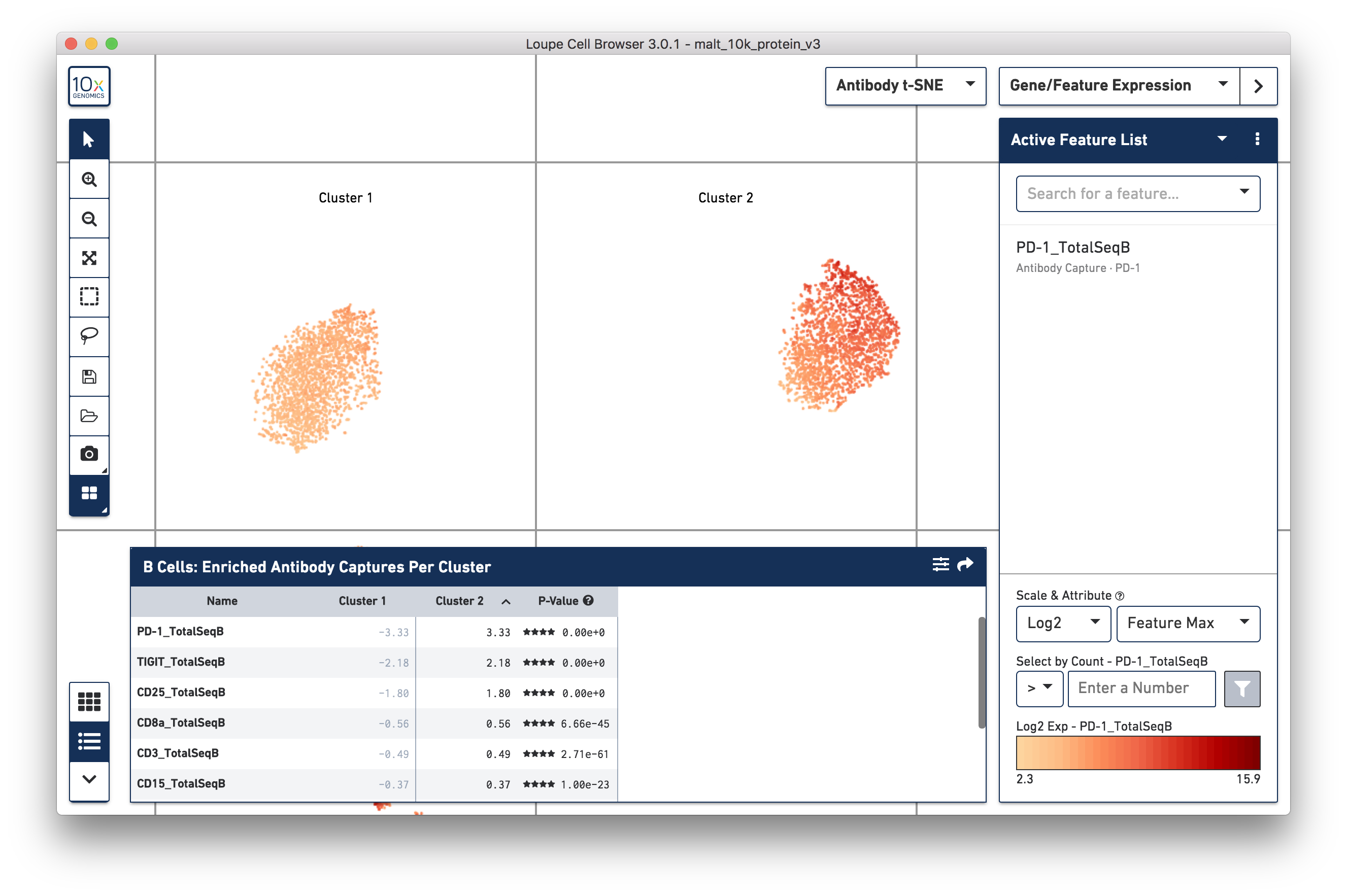 Using differential expression with Feature Barcoding reagents will also be useful in TCR-Antigen applications, where it is possible to can identify antigens preferentially bound to a set of cells with the same V(D)J clonotype.