Cell Ranger pipelines follow the convention that stages are named with verbs (e.g., ALIGN_READS, MARK_DUPLICATES, FILTER_BARCODES) and sub-pipelines are named with nouns and prefixed with an underscore (e.g., _BCSORTER). Each stage runs in its own directory bearing its name, and each stage's directory is contained within its parent pipeline's directory.

For example, the cellranger demux pipeline has the following process graph: 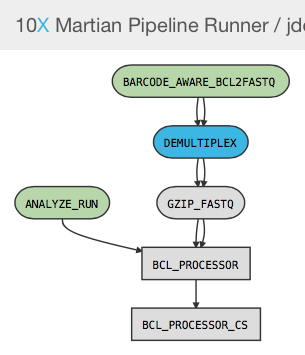 Pipestance output directories can demonstrate very complicated structures, and re-attaching the Cell Ranger UI is the easiest way to quickly navigate to a pipeline stage of interest and examine its metadata. In the absence of being able to access the UI, the standard find command can quickly return high-level information about a pipestance.

This tells us that the failed stage was SUMMARIZE_REPORTS.

Stages whose stage code run external binaries (for example, the ALIGN_READS stage which runs STAR) often generate output to their stdout and stderr streams. These messages are captured in the _stdout and _stderr metadata files within the chunk output directories, and combining find and xargs cat to examine their contents can also assist with troubleshooting.