When the cellranger-arc mkfastq or cellranger-arc count pipelines fail, they will automatically generate a "debug tarball" that contains the logs and metadata generated by the pipestance leading up to failure. This file, named sample_id.mri.tgz, can be e-mailed to the 10x Genomics support team to help resolve any issues with using Cell Ranger ARC. You may also use the cellranger-arc upload command to send the tarball to 10x Genomics. Run this code after replacing the code in red with your email:

If you wish to troubleshoot a pipeline failure yourself, it is important to identify if it is a preflight failure, an in-flight failure, or an alert.

Preflight failures are the most common and are the result of invalid input data or runtime parameters. Because they occur before the pipeline runs, there will be no pipeline output and the error is reported directly to your terminal.

Common preflight failures include failing to install bcl2fastq. cellranger-arc mkfastq will generate the following error if Illumina's bcl2fastq software is not installed:

In-flight failures are generally the result of factors external to the pipeline such as running out of system memory or disk space. Since different stages may fail in different ways, the specific error messages will vary widely.

There are a few important files that are saved to your pipeline output directory which, by default, is named according to the flow cell serial number for cellranger-arc mkfastq (e.g., HAWT7ADXX) and your --id name for cellranger-arc count.

A more detailed description of the pipeline output directory and its contents is provided in the Pipestance Structure page.

Once you have determined the reason for failure and are ready to continue running the pipeline, you can typically issue the same cellranger-arc command to continue execution of the pipestance from the stage that originally failed.

which indicates that you specified a --id that corresponds to an existing directory that was not created by Cell Ranger ARC.

If you encounter the following error when attempting to resume a pipestance:

you are attempting to resume a pipestance using command-line arguments that are different from those used to first run it. You can view the parameters input to the existing pipeline by examining the _log file located in the output directory (e.g., head -n20 /home/jdoe/runs/sample345/_log)

Alerts are generally the result of factors inherent in library preparation and sequencing instead of software. Abnormal data (including common short-read sequencing metrics and Chromium Single Cell Multiome ATAC + Gene Expression-specific statistics) are raised in the form of alerts that are printed in the output web_summary.html file. Alerts do not affect the operation of the pipeline, but they do highlight potential causes for abnormal or missing data.

For example, running cellranger-arc count at lower than recommended sequencing depth will raise the following alerts:

A single WARN and ERROR alert is not indicative of a lost sequencing run but is simply highlighting a reason why the results might be less than ideal.

However, a mis-match between the reference genome and gtf will have an extensive impact on the analysis and raise several ERROR level alerts. For example, running cellranger-arc count with hg19 genome fasta sequences and a GRCh38 gtf will raise the following alerts: 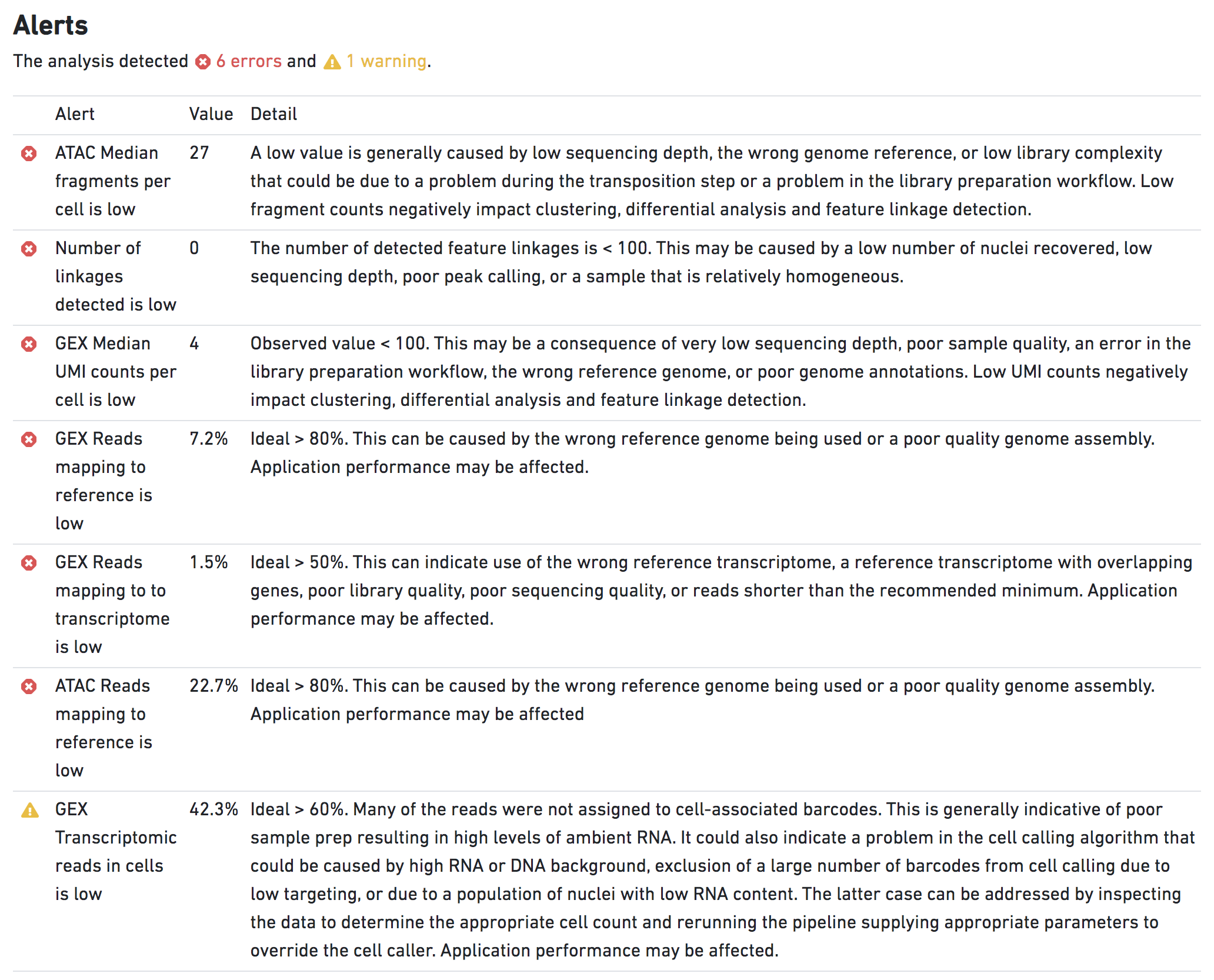 The presence of these ERROR alerts indicate that results output by this pipestance are likely dubious.